What Do Capture Cards Do, And Why Do You Need One Right Now?

Battlestation Setups is reader-supported. When you purchase through links on our site, we may earn a small commission.
Written By: Lorenzo • Updated: 25/10/2021

I'm not going to lie; I was a little confused when I first started researching capture cards since there are many different ways you can use one.

You can use capture cards for competitive gaming, whether you are live streaming or recording footage.

But capture cards can do more than just that.

So what do capture cards do?

A capture card acts as a receiver for input data, allowing you to "pass-through" footage from one device to another.

This means that you can live stream or record on one device, capture the footage from that device, and display it through another device or get it encoded and turned into a video.

And when I say devices, I mean any device that plays or records footage...

But if you're still not entirely sure, let me go a little bit more in-depth...

What Do Capture Cards Actually Do?

As stated earlier, a video capture cards act as receivers for input data, allowing you to "pass-through" footage from one device to another.

In other words, it's the middleman between two devices, allowing you to capture footage to either record or stream.

Whether you want to record footage or live stream, capture cards drastically reduce the lag between your gameplay and what you see on-screen...

Or if you're a console player wanting to take advantage of higher refresh rates or even play your Nintendo switch on a larger TV screen without lag.

Do You Need A Capture Card To Stream? 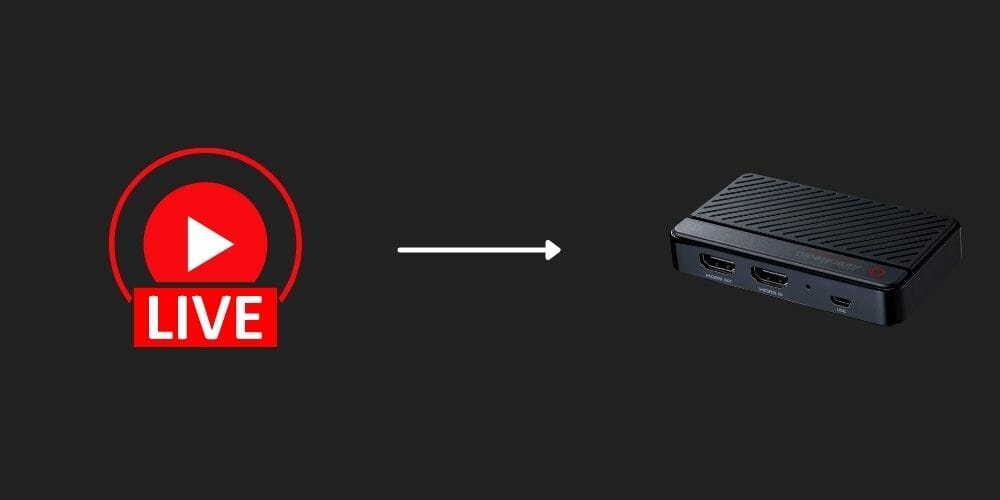 No. You don't need a capture card to stream.

In many cases, capture cards aren't necessary for game streaming...

But what they do well is drastically reduce the strain off of your primary gaming device, whether that's a PC or a console.

So no, you don't need a capture card to stream, but we recommend it, especially if you are playing some resource-heavy games.

You can also use a capture card to connect a DSLR/Mirrorless camera to your PC so that you can use it as a face cam.

Is It Better To Stream With A Capture Card?

Now, when you are live streaming games, you might use two computers where you use one PC to run the game and the second PC to receive your video output and encode it.

And the second is connected to a capture card that will record the video in a format compatible with a player that broadcasts the game.

Connecting the second computer to the first does not interfere with its system performance or affect your game in any way, which happens if you go for screen capture.

That's because screen recording is an added burden on the laptop or PC.

Screen recording might be cheaper or free, but you will pay the price in terms of the quality of the output.

Speaking of which, capture cards are also advantageous because they make high-quality game streaming possible, allowing you to look professional for your audience.

These devices also give you the bonus of allowing custom overlays that add value to your content.

And you can have the video on external storage, which gives you the option of building a library.

You May Also Like: Dr Disrespect's Setup: PC, Streaming Gear, and Peripherals

Why Should You Choose A Capture Card Over Recording? 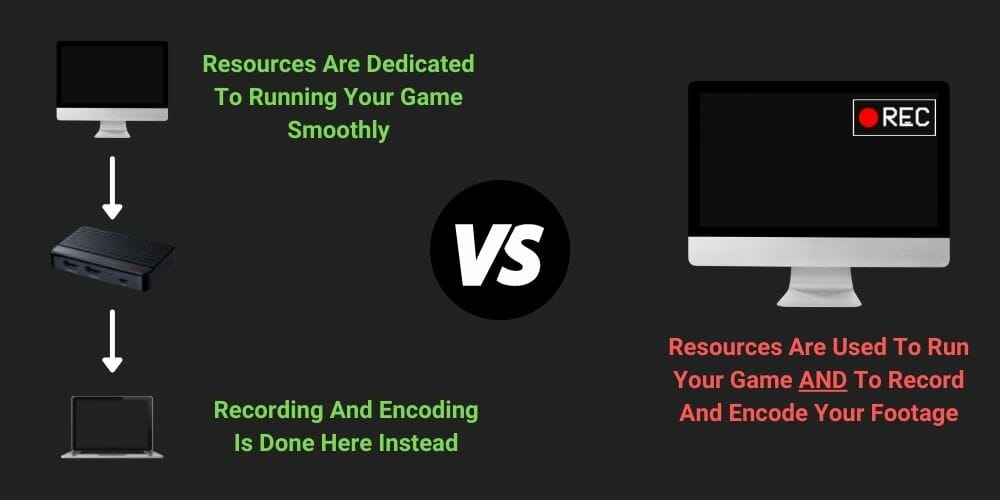 While the process is similar to screen recording, a capture card ensures that the PC you're gaming from doesn't have to use resources recording your gameplay at the same time.

And since that burden is no longer a concern, you can expect a recording or stream without lag.

Or with video game consoles, using a capture card is the easiest way to record your gameplay.

This will keep your audience engaged because the card also ensures that the output is of high quality.

Depending on the resolution you choose, the price of the card goes up or down.

Using a capture card is a better option.

But before you get one, you must know which capture card to buy and how to use it.

Your first move is to ensure that you have the right cables, including a USB cable, HDMI cable, console, and a PC or a laptop.

You won't need them all because it depends on the capture device.

There are two types of ways you can connect a capture card:

There are different ways you can record using these two types of capture cards:

Pre-Requisites Of A Capture Card

A good capture card is compatible with some Macs, all Windows PCs, HDMI-compatible cameras, and video game consoles like Nintendo Switch, Xbox X Series, and Playstation 5.

Ensure that you check the hardware specifications of the capture card before you buy one.

No matter what device you connect to, make sure your capture card has an HDMI output.

Here's what you need to use a capture card.

Below is a quick list of how capture cards work on different systems and consoles:

Quick Tutorials: How To Set Up Your Capture Card 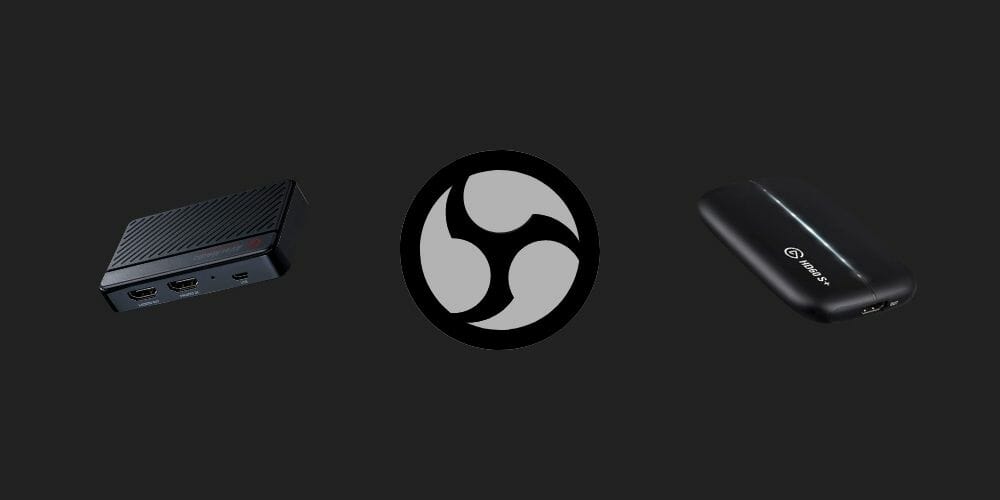 Most, if not all, capture cards work with OBS Studio, but you may find that more premium capture cards have their own recording software, namely Elgato and AVerMedia.

You will find that some features that Elgato and AVerMedia offer aren't available while using OBS, and you will need to use their native capture card app.

How To Set Up A Capture Card (General Guides)

If you are going to use a PC capture card, here's what you need to know.

Any capture card will need a PC that can read what you are trying to pass through.

But if you have heard people in the know using the term "PC capture card," you can safely assume that they mean a PCI-e capture card.

This will require you to have two HDMI cables and a motherboard compatible with your PCI-e capture card.

Using A Capture Card With OBS

If you are a gamer trying to live stream, we recommend using OBS, a popular free-to-use capture software to capture games. Here's how to use it:

It is best to test this out before your actual broadcast to iron out any possible glitches.

If you do hit a bump, click on "Help" for troubleshooting.

How To Set Up A USB Capture

Features To Look For Before Buying A Capture Card

As mentioned before, you need to find the right capture card depending on your requirements. Here are some key factors that go into buying one.

Do You Need a Capture Card to Stream Games?

You don't need it, but having one will ensure that the output is high-quality.

The high-quality resolution will show you off as a "professional," which will win brownie points in the eyes of your viewers.

This depends on your situation. If you are a competitive gamer with live streaming plans, then capture cards can be extremely useful.

The same is true for those who want to live stream or record videos.

If you are a hobbyist who only plays games casually, you can do without a capture card.

Typically, you use the capture card with a second device.

That means you use one PC to run the game and the other to record the footage.

In that case, it does not affect your FPS because your recording does not take up any resources from the PC you are gaming from.

This is the prime reason why capture cards are the preferred method of recording or live streaming gameplay, especially with games nowadays becoming more resource-heavy.

They don't have to be, but it is dependant on your needs.

If you are a competitive gamer recording footage for professional reasons, you will likely pick a card that supports the highest resolution - 4K.

The bulk of your expenses will come in ensuring you have the main pre-requisite - a streaming PC to handle the majority of your encoding.

Can I Record Audio With My Capture Card?

Yes, most capture cards allow you to record audio and video with your capture card, which you can use for high-quality recordings and broadcasts.

Pay attention, though, because some capture cards combine your microphone and your in-game sounds in one track, so you can't separate the audio between the two.

Ensure you look at how the capture card captures your audio.

Capture cards are a better option than screen recording because they are not an additional burden on the PC (unless you use only one system).

This reason alone is why a capture card is an excellent addition to your streaming accessories.

It is essential to note that some capture cards lag at the capture preview stage, so ensure you check this feature if you're planning to game on using your preview window.

With the correct hardware setup, you can produce some stunning 1080p/4K quality, which are the standards for "high-quality" footage nowadays.

There are at least five different ways of using these capture cards, all of which we have detailed above.

You can use it with a single PC or two or a gaming console.

If you're using a PC, we recommend using two systems, one for the game and the other for capturing. Now you're ready to go and buy a capture card.

The 10 Best Monitors For Streaming (For Main Or Secondaries)

How Good Is Tyler1's Setup? (A Complete Setup Breakdown)