Battlestation Setups is reader-supported. When you purchase through links on our site, we may earn a small commission.
Written By: Lorenzo • Updated: 25/07/2022

Whenever I played League of Legends, I had a LoL build site open on my other monitor.

It was easier to follow a build guide than to build on the fly.

So if you're like me and like to use LoL build sites as a guideline to build your champion, then keep reading.

Below are the 5 best LoL build sites and apps I've personally used and vetted that have given me the best builds from early to late.

But before I go on, let's get one thing straight.

Adapting your champion's build to your specific game is always better. The only way to cultivate this is by improving your game sense.

Luckily, we have a thriving League of Legends community that makes learning game sense quicker.

Which Is The Best LoL App For Builds?

Mobafire has the most comprehensive guides for high-ranking players if you are looking for cookie-cutter builds.

If you are looking for builds that have been statistically proven to work using win rates, then u.gg is the best.

If you want to test out pro-players builds to the T, probuilds.com is the way to go.

If you don't want to rely on a LoL build site for your games, use them as guidelines only.

The best way to build your champion is to:

Analyzing what your opponents are doing and answering with the appropriate items are the best way to build your champion.

For example, if a team has five champions with cc, you will want to get the Quicksilver Sash, so you can escape easily, just in case you get stunned.

If the opposing team is heavy on tanks, you will want to grab armor penetration items to build Lethality and/or Armor Penetration.

Game sense will be the difference in swaying your duals or team fights in your favor.

Learning your champion and the type of items they work best with is essential.

Mobalytics is an excellent website with a friendly user interface and is ideal if you are new or coming back from a long hiatus.

League is notorious for changing their meta's quickly, so a good way to stay up-to-date with the latest builds is to see which items have the highest win rates and in what build order.

They include a lot of helpful information, including good or bad match-ups, runes, summoner spells, etc.

Mobalytics includes easy-to-read graphs on win rate %, pick rate %, and ban rate % over the current and past patches.

These are critical pieces of information to know whether or not a champion got nerfed and how they perform in the current meta today.

Another unique aspect of Mobalytics is the "Time Target" in your build items.

Time target shows what time you should buy said items depending on your skill level.

Statistically speaking, you should be buying your first early item at the 5-minute mark and your three core items within 21 minutes.

This is a good indicator to see if you're on track regarding your cs count.

Additionally, Mobalytics has a downloadable app that you can integrate into League of Legends to provide information in real-time.

It syncs with your current game and updates on the fly, which is super convenient for making the right purchase decisions.

I mean, I was a hyper-carry Vayne main, so getting my core items were more than enough to sway the entire game.

U.gg is another insightful website that uses statistics to determine which items and builds are best.

The site has a friendly user interface that's simple to understand and provides you with % win rates, the number of matches they've analyzed, and the exact build path.

Here's an example of what you would see:

I really liked the UI here. It was simple and super easy to follow.

It shows the highest WR items in order depending on the number of matches analyzed where users bought the item.

You can also change the rank, so if you want to build a particular champion the way Challengers build the champion, you can do it with a click of a button.

Though the downside to u.gg is its cookie cutter.

Sometimes you'll need to adapt to the game and buy an item that isn't featured on the list.

I would say that the items on the list are very adaptable.

But again, use the site as a guide only.

Additionally, u.gg has a lot of helpful information, including rune builds, summoner spells, match-up statistics, and the top players using your champion.

Mobafire was the first website I used when first getting into League of Legends, and they have been standing firm as a reliable source for League build guides ever since.

What makes Mobafire different is that the builds aren't based on statistics like Mobalytics and u.gg.

They're based on players' personal experiences with specific champions.

And these players aren't your regular joes either.

Here's an example. Vapora Dark is a long-time contributor to the site and has many in-depth guides on champ builds. He's reached Master rank on the EUW server. 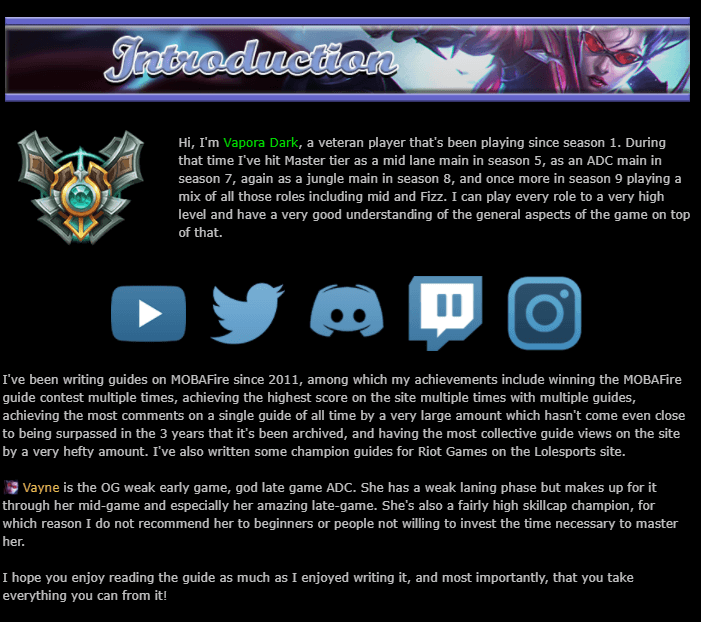 Gaining insight from high-ranking players is an excellent way to improve your champion, and the amount of detail in many guides is astounding.

The downside to Mobafire players will always have different styles of play.

Even when they're using the same champion.

So you'll need to test which build guides resonate with your game style the most.

Ensure you look at the highest-rated guides and check out the player's credentials before committing to a build guide.

Blitz.gg is a lightweight application that integrates directly into League of Legends, allowing you to get real-time build info in-game.

Their website also provides build guides under their statistics section, but it's better to integrate the app with your client. It provides better insights.

The seamless integration makes it an attractive software to utilize, as it not only gives you builds using statistics (similar to u.gg) but also monitors your in-game performance.

It also includes a 'Pro Builds' feature, which allows you to pro players builds.

It takes it a step further by showing the exact match-up to gain insight into what the pro was thinking.

You can select the most common or highest win % builds. The choice is yours.

Remember that they may not necessarily be the best builds to use at the current time.

Though, what's great about the site is that it adapts your build to the champion you're versing.

If you're sick of alt-tabbing or looking at your second screen whenever you play - blitz.gg is the best alternative.

You'll gain valuable real-time insights on how you perform after the game finishes.

Great for analysis if you're serious about improving.

The best thing about blitz.gg is its import function.

The important function allows you to easily import recommended runes, summoner spells, and build guides, which you can access in-game.

You'll save tons of time buying your items since they're all on one screen.

It might not make a huge difference, but at higher ranks, every second counts.

Op.gg is another LoL build site you can use to determine your builds.

I've ranked op.gg last due to their user interface, which isn't as easy to gather information as Mobalytics or u.gg.

However, the premise of their build guides is the same.

They also offer stats on:

To be perfectly honest, I don't use op.gg as much as the others.

Simply because I don't like the user interface. It's just hard to look at.

Though they have a huge database of users on their site, their data should be accurate.

They shine when it comes to gathering data on your performance.

It has an excellent UI for your profile and provides great insights into your previous match history.

Below are some frequently asked questions...

Op.gg is reliable for build guides, but they have a terrible user interface compared to u.gg and Mobalytics.

Where op.gg shines is by analyzing your gaming history.

They provide quality insights and statistics over your previous games.

If you're looking for an all-in-one solution that includes everything I've just mentioned above (build guides, game history, etc...)

Blitz.gg is the better alternative.

Should I Follow Build Guides Or Build The Champion Myself?

It's always best to use your game sense to create your builds.

Having a deep understanding of League of Legends through your own experiences will make you a better player.

Knowing exactly what to build against your opponents is a critical skill to have, especially at the higher elos.

It's always good to refresh your memory or see global statistics when it comes to building guides, but having the ability to adapt to what's happening in real-time is the best way to gain an advantage over your competition.

By now, you should have some valuable tools in your repertoire to improve your skills in League of Legends.

Data can be a handy tool to see where you lack so you can focus on improving in those areas, and it can also show where your strengths are.

It's best to rely on your game sense rather than following cookie-cutter builds, so try to combine both to get the best of both worlds.

If you have your method for selecting which items to choose for which champion, comment below with your method; we would love to hear it.

How To Fix And Prevent League Of Legends Screen Tearing

League Of Legends Ultrawide: What Are The Pros And Cons?

The 5 Best Keyboards For League Of Legends (For All Budgets)

What Is The Best Resolution For League Of Legends? (2022)

Best Settings For League Of Legends To Rank Up FAST (2021)