What Is The Best Resolution For League Of Legends? (2021)

But is that the best way to play the game?

Isn't having a larger screen better for gaming?

The choice between 1080p, 1440p, or any other resolution isn't that complicated, and it comes down to personal preference.

But in this article, we will discuss the pros and cons for each screen resolution size, as each will have pros and cons and suit different preferences.

Your screen resolution can also determine what kind of monitor you plan to get.

If that's the case, you can check out our guide on choosing the best monitor for League of Legends.

What Is The Best Resolution For League Of Legends?

League of Legends is a game you can run on older PCs without any problems. As a result, most pro players started playing on 1920 x 1080 and have not changed, and it is also the recommended resolution to play League of Legends.

It's best to test out which resolution you may like and commit to practicing on it.

There's no point playing on 1920 x 1080 if you don't enjoy the experience, so choose one that you like to use. 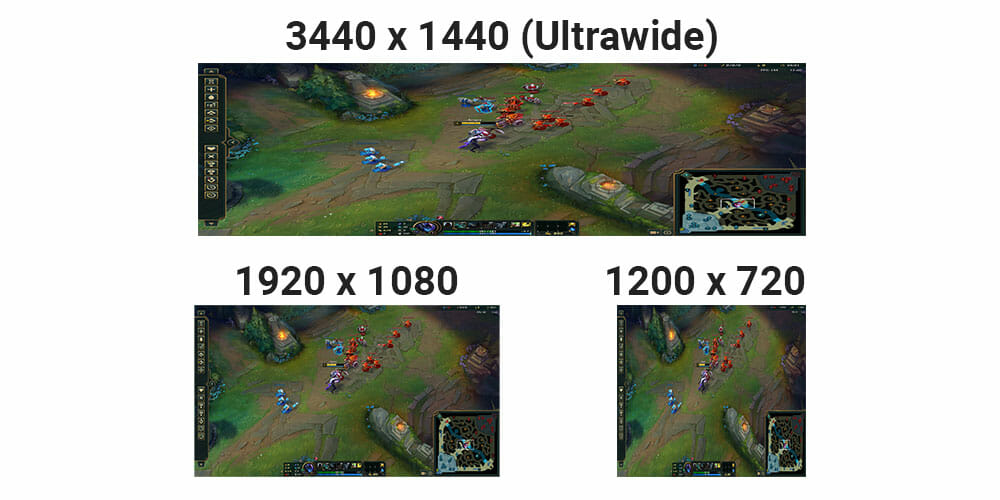 Below is a list of the most commonly used monitor resolutions played by pros.

Resolutions that are often seen being played on are:

The reason why players would be gaming on such a small screen resolution could be because they have been playing for a long time (when they had a square monitor)...

And they have gotten used to it despite having a bigger monitor.

Or they find it easier to see information when everything is more compact.

What you may not like about these smaller resolutions is that they may be too small to see.

For a person who needs to wear glasses at my desk when I game, this is definitely too small of a resolution for my liking.

But if you have 20/20 vision, you may find it easier to see what's happening at every stage of the game.

Most professional players play on 1920 x 1080 despite having bigger monitors that can support higher resolutions.

Why? It's large enough that that user interface is appealing to the eye, but it's not too big to the point where you have to keep looking around, making it harder to multi-task.

You won't find yourself losing focus on what's in front of you, similar to a smaller screen resolution.

But it stretches it out far enough so that you can see the finer details.

Another one of the main reasons why pros play on a 1920 x 1080 resolution is because all the top LoL competitions like LCS and Worlds are played on 1920 x 1080 monitors.

It's essential to mimic competition rules when practicing, so it will feel natural when it comes time to compete.

A 2560 x 1440 is an excellent resolution if you prefer having everything look bigger in LoL.

I find that it's easier to see everything, to click on champions when attacking, and it showcases more of the aesthetics of the game, which I enjoy looking at.

Although, the downside to having a bigger screen comes down to focus...

By nature, you are multitasking in League of Legends by constantly looking at the minimap, cs'ing, trading, and predicting the enemy jungle path.

Having a larger screen resolution can make it harder to multi-task since you must look further away.

It can also be a hassle to make accurate clicks as now you have to drag your mouse further away (which can stunt your Clicks Per Minute).

It will also force you to drag your mouse further to move your camera.

These are very subtle differences, but they are noticeable, so it's best to experiment between the two.

These are best suited for you if you want to see part of the maps that you wouldn't otherwise be able to see on a regular 24" or 27" monitor.

Just have a look at how it looks: 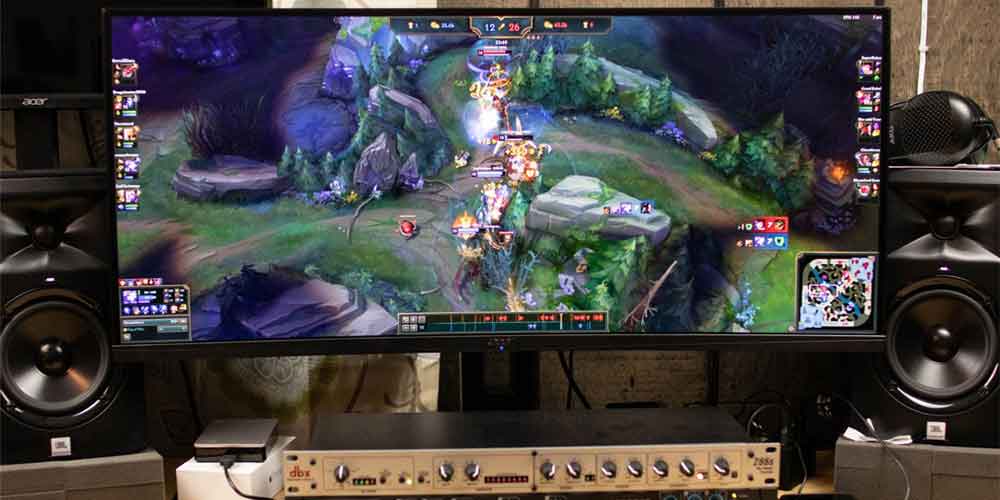 Although quite intriguing to look at, it won't necessarily give you a more significant advantage...

Since the minimap is where your eyes will be shifting to every 3 - 5 seconds, and will give you a faster glimpse of information than having to look to the far sides of your screen.

So that being the case, you will have more diminishing returns than actually helping with your gameplay.

For the most part, League of Legends is best played on smaller screens (just don't make it too small).

That way, you can gather information faster, which will make reacting to situations easier.

What Screen Resolution Is Too Big For League Of Legends?

The resolution that is too big for League of Legends would be any resolution above 2560 x 1440.

League of Legends is a game that requires focus and effective multi-tasking, so the easier you can glance and retain information, the better, and that usually comes with having a screen that is 'just right, like a 1920 x 1080 resolution.

When it comes to bigger resolutions, like a 3440 x 1440 may allow you to see more of the map, but it won't necessarily make you more efficient at gaining information.

So unless you enjoy gaming on full-screen for its aesthetics, or you do want to see additional parts of the map, opt for a resolution of 2560 x 1440 or lower...

Should You Play On Full Screen, Borderless Or Windowed?

The windowed mode that you should play on depends on some key factors:

Fullscreen is the recommended choice, as it gives you the maximum performance, brightness, and the least amount of input lag.

Borderless is also excellent as it gives you that full-screen effect and allows you to alt-tab easier.

This is especially good for those who only have one monitor on their setup.

It's important to note that in some PC/laptops that playing on borderless may introduce input lag.

So if you find that happening with your system, put it on full-screen instead.

Windowed is good but is the least favorite because you can see the outer frame. 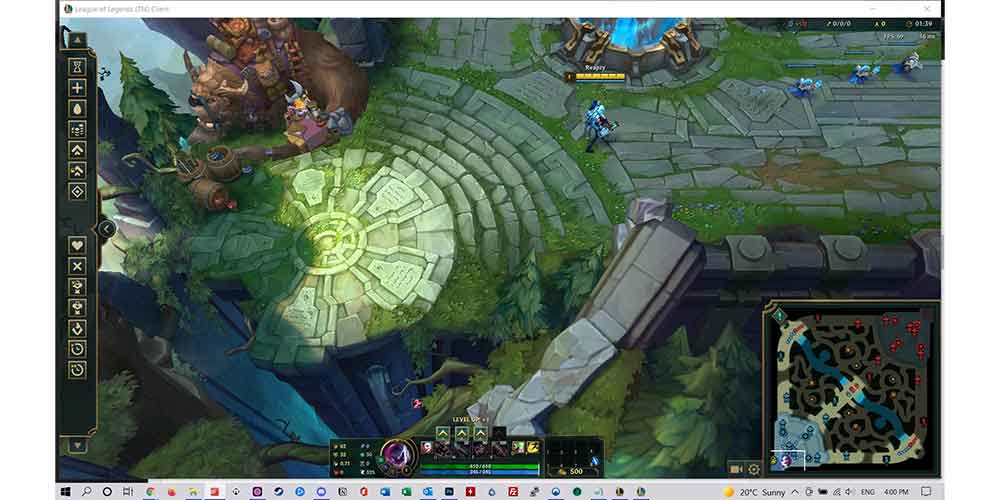 And if you have a larger screen, but play on a resolution smaller than what's native to your monitor, then you will be able to see your desktop as well, which can be distracting.

So when it comes to choosing between the three, opt for the one that suits your workflow the best.

Fullscreen is best for those who have two monitors or more since you can have your cookie cutter builds on the other monitor and you won't need to alt-tab, and you can ensure the least amount of input lag.

Borderless is best for those who have a single monitor and alt-tab a lot. It can reduce your brightness and introduce input lag, but this can be the better choice if it doesn't.

What Is The Best Video Settings for League of Legends?

If you want a deeper dive into finding the best settings for League of Legends check out the article previously written.

Below is a quick snippet on the best video settings, taken straight from that post.

What FPS Is Good For League of Legends?

The minimum FPS you should be getting is 60 FPS, as anything below will make the game feel and look laggy.

The higher your FPS, the less input lag you will have, and therefore the more responsive your monitor will be.

So when it comes to FPS, look to maximize performance without making the game look bland.

For the most part, pros put everything on low except for Character Quality and Environment Quality.

Just use the settings listed above and save yourself some FPS.

Oh, and if you have G-Sync/FreeSync capabilities, cap your FPS to your monitor's refresh rate (and turn the function on), as this will eliminate screen tearing.

What Is The Best Monitor Size For League Of Legends

At the end of the day, the best monitor resolution for League of Legends is the one that you enjoy playing on.

Although, if you want to copy the pros and maximize performance, the best practice is to use a 1920 x 1080 resolution.

It's not too small that everything feels cramped but not too large that it forces you to move your head.

As always, we are interested to know what you guys enjoy. Comment below and let us know what screen resolution you enjoy playing on!

Battlestation Setups is reader-supported. When you purchase through links on our site, we may earn a small commission

Since the age of 6, Lorenzo has enjoyed gaming on computers. Having grown up in the digital age, the technology revolves around him. He enjoyed growing up gaming throughout his high school years and is now a young adult who does most of his work on his computer. Lorenzo's mission is to make buying products and building PC's an easy and fun experience for all.
© 2021  |  Made By SERPSamurai  |  All Rights Reserved
Contact | About | Privacy Policy | My Setup
We are a participant in the Amazon Services LLC Associates Program, an affiliate advertising program designed to provide a means for us to earn fees by linking to Amazon.com and affiliated sites.
Sitemap
We use cookies to ensure that we give you the best experience on our website. If you continue to use this site we will assume that you are happy with it.Let's Go!