League Of Legends Ultrawide: What Are The Pros And Cons?

Battlestation Setups is reader-supported. When you purchase through links on our site, we may earn a small commission.
Written By: Lorenzo • Updated: 27/09/2021

League of Legends is a game that requires constant multi-tasking, which includes gathering intel, farming, and working as a team.

So when it comes to choosing a monitor, will a League of Legends Ultrawide screen give you an advantage?

This has been debated quite often, so in this article, we will discuss what League of legends looks like on an Ultrawide monitor and how it affects gameplay in League!

And if you're interested in finding the best monitors for League of Legends, then check out our guide.

Is It Worth Buying An Ultrawide Monitor For League Of Legends?

Ultrawide gaming monitors are expensive and are better suited for office-type work as opposed to gaming.

In a game like League of Legends, an Ultrawide monitor will allow you to see more of the map but doesn't really give you a more significant advantage.

You may see more of the map, but your minimap will be tiny, limiting the information you can gather all over the map.

For lower elo players, it may be easier to play on an Ultrawide since you can see ganks coming from a mile away.

The problem with this is that you get accustomed to looking at your screen only and not actually looking at your minimap, which is a critical skill as you climb the ranks.

Map awareness is one of the more critical fundamentals in League, and it would be good to practice it as you get better, and unfortunately, with an ultrawide monitor...

It makes it hard to do that since your minimap is tiny.

Still, even in saying that League does run perfectly fine 21:9 or even 32:9 (Ultrawide) aspect ratios... so there's no problem, just something to note.

What Does The Minimap Look Like On An Ultrawide Monitor?

If you're a lower elo player, you will be able to see coming from a mile away, but your map awareness will be non-existent.

For higher elo players, it's more important that you have a game sense of where the jungle is at all times, and more often than not, it's through watching the minimap or checking the TAB screen.

But, the main issue I see would be quickly gathering minimap intel. 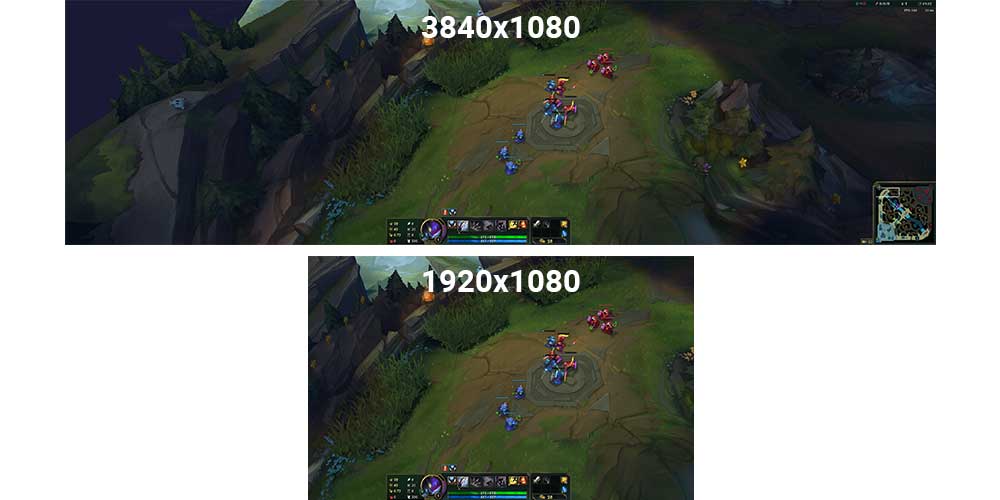 How Much Of An Advantage Does An Ultrawide Monitor Give You?

For low elo players (Iron - Gold), the increased FOV (field of view) is insane. It will allow you to see ganks from a mile away or can help you join in skirmishes since you can see them in real-time.

For higher elo players (Platinum - Challenger), you should be good enough to gather information from your minimap and have a feel for when ganks are incoming; therefore, the peripheral vision isn't much of an advantage at this point.

At first glance, it does seem like it gives you a more considerable advantage since you have a ton of screen real estate in which you can see parts of the map that you wouldn't usually be able to.

But that's really it. What's important to look at is also the disadvantages of an Ultrawide monitor.

Here are the pros and cons to summarize both advantages and disadvantages:

The main advantage when it comes to an Ultrawide monitor is vision. The ability to see far ahead instead of relying on your minimap can be very beneficial.

When it comes to Plat+ ranks, the peripheral vision advantage is not much of an advantage anymore.

At that point, most players have decent fundamentals, meaning they have a general idea of when ganks will occur and can gather info from their minimap quickly.

How League Of Legends Looks In Different Aspect Ratios

Below are some examples of how League of Legends looks in different aspect ratios.

What If You Want To League Of Legends On An Ultrawide Screen?

If you value gaming performance, buying a 27" screen-sized monitor is the max you should go before you have diminishing returns on your investment.

I play on an Alienware AW2720HF and let me tell you, the gaming experience has been amazing. 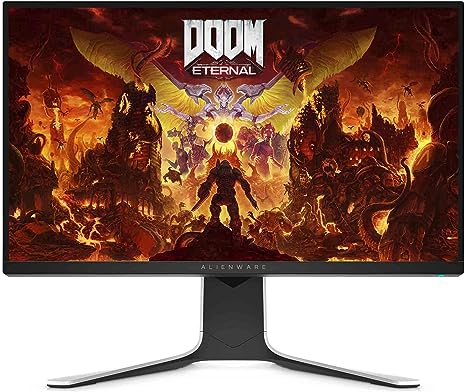 Alienware AW2720HF 27-Inch 240Hz Gaming Monitor Check Prices
We earn a commission if you make a purchase, at no additional cost to you.

It did take a while to get used to due to the larger screen space, having to move my mouse farther than usual, but after a couple of hours, the experience was enjoyable.

Having a larger screen size allowed me to have an easier time seeing enemies on the screen as opposed to a standard 24" monitor.

And the IPS panel is eye-candy if you want a more immersive experience since the monitor has vibrant colors.

However, if you are in need of a curved ultrawide monitor because you use your setup for more than just League, then my monitor recommendation would be the:

The G9 is 49" of 240Hz goodness, so you'll still get quality performance while having amazing image quality and of course a ton of screen space.

Although, I would recommend playing on a 16:9 ratio instead of stretching the screen out to the ends.

Below are some frequently asked questions...

Does League Work In Ultrawide?

Yes, it does, with no problems at all.

You just need to make sure your PC can handle such a large screen size.

The main component affecting this would be your GPU.

Does League Of Legends Officially Support 32:9?

It doesn't officially support 32:9, but League of Legends is not a graphics-intensive game, and therefore running it on a large aspect ratio is no problem.

They, however, made it so that you can only zoom out a certain amount, therefore not giving large aspect ratios an unfair advantage.

Is A Curved Monitor Good For League?

Curved monitors are fantastic for League of Legends.

The ergonomic curve makes it easier to see the edges of your screen.

27" monitors would be the maximum recommended screen size for gaming on League of Legends.

Anything above 27" is overkill for the reasons I explained above.

Why Are Ultrawide Monitors Bad For Gaming?

The reason why monitors are bad for gaming is two-fold.

You can tell that a 21:9 (or higher) aspect ratio isn't supported because your game will look stretched, may not fit the entire screen, or will have black bars on the sides.

An example of this is Overwatch, which has intentionally disabled 21:9 aspect ratios to avoid giving players unfair advantages.

Secondly, your PC has to handle higher resolutions, which uses a lot of GPU resources, which could impact your game's performance.

FPS is one of the most critical metrics for benchmarking your system and getting an advantage over your competition.

If your system can't handle larger aspect ratios, you will see a drop in FPS and an overall graphic quality, which will make your gaming experience terrible.

So is it worth spending the extra money to buy an Ultrawide monitor?

Unless you are planning to use it for non-gaming applications like for work, they might as well save the extra money.

At the end of the day, it's up to your personal preference. If you enjoy having the peripheral vision advantage, by all means, go for it!

We wrote a guide on our favorite monitors for League of Legends, you can check it out here!

Alternatives to buying an Ultrawide monitor is building a dual monitor setup, which can consist of two 24" or 27" monitors.

The Best Kovaaks Routine For VALORANT (Get To Plat FAST!)

How To Fix And Prevent League Of Legends Screen Tearing

The 5 Best Keyboards For League Of Legends (For All Budgets)

What Is The Best Resolution For League Of Legends? (2022)

1 2 Next »
We use cookies to ensure that we give you the best experience on our website. If you continue to use this site we will assume that you are happy with it.Let's Go!