Having followed and watched many videos of shroud dominating in many FPS games, I’ve always thought…

What’s shrouds gaming setup? And how well does it perform?

As a full-time streamer, you need to pack some serious heat when it comes to building a proper gaming arsenal that can handle everything you need.

It’s always interesting to me to see what kind of gaming setup streamers have.

Whether they work with a low budget or have a gaming setup that is overkill.

I had a look at what shroud was running, and as you would expect, he has an amazing setup with great peripherals and components.

In this blog post, we will show you all the gear that shroud currently uses so that you can get started on your own setup!

Having gone through this list, I can say for certain that Shroud games in absolute comfort, with peripherals that perform very well.

Shroud has been a long-time user of Logitech and had gotten to the point where he was able to collaborate with Logitech to create his own peripherals.

Logitech’s peripherals have been featured in many of our previous articles, with the Logitech G Pro X Superlight being the #1 pick for the top gaming mouse for VALORANT.

Logitech’s G Pro X Gaming keyboard is another top pick of ours, being featured in the best gaming keyboards for CSGO.

These switches are a collaboration between Logitech and Romer G switches, which have created a unique and high-quality switch that’s both responsive and satisfying to press.

Surprisingly, Shroud doesn’t use Logitech’s G Pro Play (which wirelessly charges your mouse) but rather opts for the larger mouse pad which is the G840.

This covers your whole desk, so you’ll never run out of mouse pad room again.

Shroud’s monitor is the Alienware 27″ AW2721D Gaming Monitor is one of the most highly sought out gaming monitors.

It is QHD which allows for a nice assortment of colors and high-quality image rendering.

And it boasts a lightning-fast 240Hz refresh rate, which is what’s recommended for FPS games.

Herman Miller reigns supreme over any other gaming or office chair available on the market.

The Herman Miller chairs are known for their superior comfort and ergonomics and are priced well above $800.

Even second-hand chairs are being sold for around $600 – $700, being more expensive than premium-gaming chairs such as Noblechairs or SecretLabs chairs.

If you’re sitting on your chair, gaming all day, it’s important you get a chair that boasts comfort, and won’t make your body sore.

The Herman Miller X Logitech Embody is a chair that accomplishes this, and you can see this in shroud’s stream. 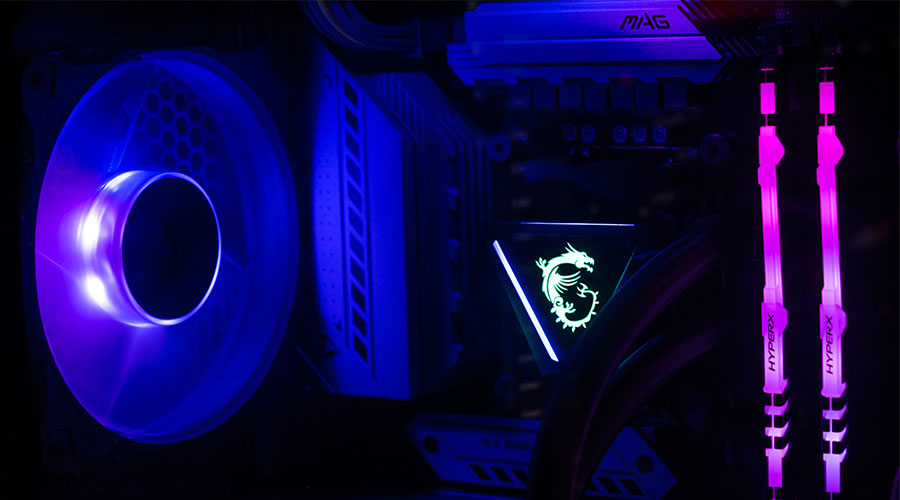 Shroud’s PC setup is no doubt a high-end that can handle streaming, the highest quality graphics card on any game, and then some.

You can see his incredibly clear gameplay firsthand on his Twitch channel and his replays.

As a twitch streamer, you are running many different applications and software, so having a computer that can stream while having multiple applications open is key.

The AMD Ryzen 9 5950X is one of the fastest high-end CPUs, including 16 cores and 32 threads, which allows you to run multiple programs efficiently, without lag.

Its base clock is 3.4GHz which can be overclocked to 4.9GHz, which quite frankly is overkill in terms of performance.

But if you’re a full-time streamer, you would be running a lot of programs including many plugins for twitch, OBS and have multiple tabs open at all times.

NVIDIA’s new 3000+ RTX series took the Graphics Card market by storm, having been known for superior performance to its predecessors whilst being sold at a cheaper price.

The 3090 is at the top of the food chain, having TITAN class performance.

With this GPU, you can play any AAA, graphics-intensive game at the highest settings.

Coupled with a strong CPU like the 5950X, you won’t have any issues whatsoever, and can enjoy a premium-level gaming experience.

The ASUS ROG Strix is the perfect combo with the Ryzen 9 5950X, including an array of PCIe, USB, and SATA slots.

It’s specifically made for gaming and high-end PCs.

The HyperX Predator’s come in many different GB sizes, but 64GB is the maximum you would need if you’re a serious gamer.

With a great speed of 3600MHz, you won’t experience any lag and have fast-loading apps even if you’re running the heaviest of software or video games.

The Maingear Vybe case that shroud is rocking with his PC isn’t a mainstream case.

Rather, it’s more low-key, but high-quality, being one of the best water cooling cases available on the market. 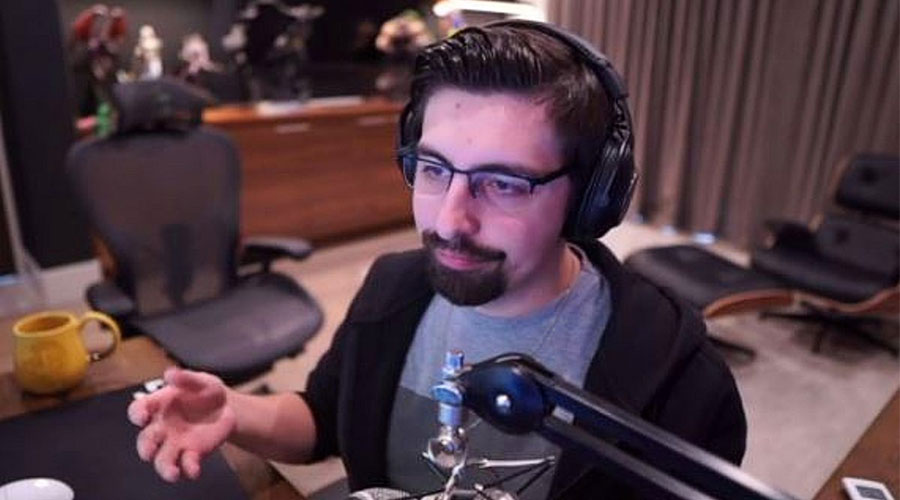 If you would like to have a high-quality stream similar to Shroud’s quality, then below you will find his exact streaming gear.

Shroud’s face camera is a mirrorless SLR camera that has extremely clear quality.

There are many great benefits from owning this camera, but the main reasons being an incredible array of lens selection and great quality specifications.

It has great battery life (not that you need it for streaming), and performs well in low-light situations.

Compact, capable, and easy to use, if you travel and stream, you won’t have any problems traveling with this camera.

Blue is a well-known audio brand that comes out with a lot of great microphones that many streamers use.

If you watch Shroud’s stream, then you already know the sound quality this microphone can give you.

If you’re looking to stream on twitch or YouTube, then this is a high-quality microphone to have.

Usually, if you want your microphone out of the frame, then you need a microphone arm to support it.

RODE’s PSA1 is constructed well, is sturdy, and can be maneuvered in various positions.

Focusrite Scarlett’s 2i2 is all 3 and is used by many musicians, not just streamers.

For its price point, this is one of the best value audio mixers available.

What Games Does Shroud Play?

How Much Does Shroud Make?

Shroud has had an incredibly successful streaming career and is possibly one of the best FPS players of our generation.

Boasting a lot of clip-worth gameplay that is syndicated from his twitch to his YouTube and other platforms.

If we are to make an estimation of his income, let’s put it this way:

We can estimate that he would be earning around $400,000+ annually.

It’s important to note that these are just ball figure statistics, there are most likely other ventures we don’t know about, and anomalies like his videos going viral which would spike his income.

Does that mean you could be doing these numbers too? Possibly, but unlikely.

If you are looking to become a serious twitch streamer you should treat streaming as a business, not for fun.

You can check out our beginners guide on how to become a streamer and grow your fan base quickly.

How Much Does Shroud Make A Day?

Based on our estimations from the previous question, Shroud would be making $1,000 minimum per day.

Have you ever wondered what the exact setup is for a top Twitch streamer like Shroud?

If so, we have all of the details right here.

From his gaming peripherals to his PC build and streaming gear, this blog post will give you access to the incredible setup of one of the most successful, and accomplished twitch streamers have.

Comment down below with your own setup if it matches or comes close to match Shrouds!

When you purchase through our links, we may earn a small commission.

Do you have a passion for building PC's or gaming?

Have experience in building your own PC setup for gaming or work?

Apply to be a writer for Battlestation Setups.

You can learn more about it here. 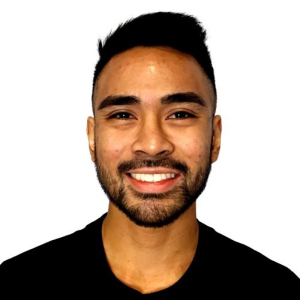 Since the age of 6, Lorenzo has enjoyed gaming on computers. Having grown up in the digital age, the technology revolves around him. He enjoyed growing up gaming throughout his high school years and is now a young adult who does most of his work on his computer. Lorenzo's mission is to make buying products and building PC's an easy and fun experience for all.

Proud of Your
Battlestation Setup?

Submit your battlestation setup for the chance to be featured on our upcoming YouTube channel!

Get exclusive access to the latest product reviews, tips and
tricks and fancy up your battlestation setup.

As an Amazon Associate I earn from qualifying purchases.